It all started in the Garden of Eden with the creation of Eve by Satan. For despite what it says in the Bible it is clear that no loving God could inflict such a scheming harridan upon his beloved Son Adam, and therefore we must look to his nemesis for the creation of womankind. It seems clear that Satan stole into the Garden one night while Adam lay sleeping, and removed from the garden some of Adam's leavings in order to fashion as foul a temptress as he could. Upon the successful completion of his succubus, he placed her into the Garden and let her work her wiles upon the innocent man, tempting him into sin in her infernal cavern.

Unfortunately despite this clear historical evidence of the terrible threat that women pose to mankind certain agents of Satan, traitors who sold their souls for the false promise of the vagina, began to spread the notions of equality and universal suffrage and in time it came to pass that women were given dreadful equality with men. And since that time the world has become a darker place - the threat of terrorism, of chemical and biological horrors, the rise of cancer, AIDS and mental illness. All directly caused by the incessant Satanic meddling of women.

So what must be done about the problem of women and the evil that is inherent in their every part? Clearly this situation cannot continue or else all mankind is eternally doomed to repeat the same mistakes at the behest of the hordes of hell. But we need these foul temptresses in order to further the human race; it is through this ultimate control that we are forever dependent upon them. But are we? No! For the Lord has provided an answer if only we are corageous enough to accept it. 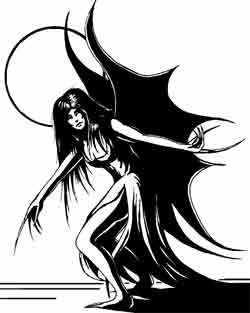 Rationalty and science are the Lord's gifts to men, a way to ensure that we are not eternally damned for the sins of the First Whore. History after all shows us that women have no clue when it comes to logical thinking and no place in the halls of academia - can you name any female scientists? And when I say that, I mean a female "scientist" who didn't have a husband who actually did all the work.

Through this wonderous blessing, men have struggled with the problem of women, and how we can escape the curse of their Satanic ways. And finally it looks as though we can - through the miracle of artificial wombs! Hallelujah! No longer will we be dependent upon these man-eating succubi to continue the human race.

How would this work in practice? Well, it's simple as long as we can overcome their feminine wiles and hold fast to the strength of the Lord. All breeding must stop and we must immediately implement a sterlization program for all females; this is the only humane solution which ensures that no lapses can occur through which the female can undermine our Great Plan.

Once we have neutered this key element to the power of these she-beasts, we must proceed full ahead with the rest of the plan. All men of sound character who are unspoilt by the lusts invoked by women must commence a breeding program whereby they provide their seed to Christian scientists for the purpose of Godly procreation, in order for us to improve the race through the scientific selection of Christian traits, most importantly of all the God chromosome which separates us from the agents of Satan.

As decent Christians no further action should be taken against the succubi other than to ensure they can no longer work their wiles upon men - this can be acheived through the use of techniques such as concealing clothing, or forbidding them contact with all but the most dedicated of men. This way, we can peacefully carry out the great plan while staying true to the Lord's strictures against violence and bloodshed - for to engage in such acts would pervert the whole purpose of this scheme and hand victory to the jezebels!

I do not expect these ideas to be popular; indeed far too many men out there are already under the spell of the Devil's agents, and would gladly sacrifice the future of the human race for a taste of the pleasures of the fetid pit. But if there is one thing this great country has it is men who are willing to follow the Lord's path despite all the obstacles placed in their way, and just as Christ did we must overcome all temptation and emerge purer with a shining focus upon the salvation of all mankind, and a final defeat for Satan.