I was awoken from blessèd dreams of Joseph and Mary by a quiet murmur emanating from Sister Judith's chamber across the hallway. Curious, I silently arose and crept down the hall. The murmuring grew in volume as I approached the door to Judith's chamber, and I could soon discern the voices of several Sisters whispering and giggling. As I nudged the door open, I was surprised to find that nearly all the convent had convened within! Judith and the other Sisters stood transfixed over a dusty tome, upon the spine of which stood in austere lettering the words "Gray's Anatomy". Wondering what could be so alluring in such a Christian and noble-sounding book, I naïvely walked forth to look at the open page...

...and was greeted by the sight of an enormous phallus.

I nearly fainted with shock. Was this audaciously ascetic convent truly such a den of depravity? Had my twenty-year tenure of chastity and devotion to the Church all been forsaken? The demonic diagram seemed to slither off the page, its serpentine form teasing me, much as the snake must have tempted Eve to taste of the Tree of Knowledge. Had I been cursed to rot in Hell for viewing a man's verboten venereal region?

Then suddenly, praise the LORD, I was enlightened. I would not rot in Hell for tasting the forbidden fruit. For the very idea that such vulgar anatomy could be part of every God-made male on Earth is absolutely preposterous. Furthermore, that such nonsense could even be published is a damnable affront to everything the Christian religion stands for.

As I tore the blasphemous book from Judith's startled hands, the LORD populated my mind with His unlimited knowledge. Yea, a God as loving and wise as He would never think to deform Mankind with such absurd organs as the so-called "penis" and "testes". The disadvantages such anatomy would inflict upon their bearer are too crackpot to consider: 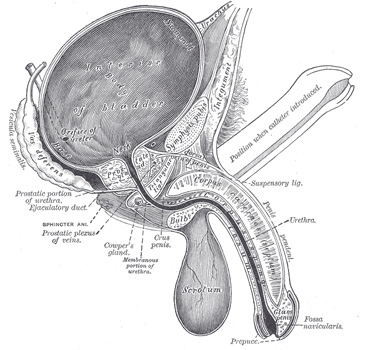 There is no evidence to support the idea that any of God's creatures have anything more than a few svelte folds of flesh to fill their venereal region. The pigeons which roost within my chamber window, both man and woman, do not have a penis. The serpent which slithers through my herb garden, no matter how vile he may be in the eyes of the LORD, does not have a penis. I have never taken the time to look, but I am fairly sure that my puppy, named Shaft, does not have a penis. Why would the LORD single out Mankind, the most beloved of His Creations, to bear the weight of this ball and chain? He would not, for He created Man in his image, and surely a rational God would not carry around such needless baggage with Himself.

Throughout history, phallus worship has been strictly the realm of Pagan and Liberal ceremony. One must wonder why all this cock-waving suddenly disappeared with the emergence of the One True Church. It is obvious that the existence of this organ is nothing more than a fabrication of the ignorant idol-worshipping Barbarians who lived before Christ's time. In fact, it is highly likely that this blatant falsehood brought forth the wrath of God upon the debaucherous denizens of Pompeii, and eventually upon all of the once-mighty Roman Empire. Unfortunately, some ignorant folk still choose to propagate this dangerous myth today, mainly mindless hippies and eco-freaks educated stupid by their excessive "open-mindedness" and pseudoscientific quackery, most of which has no basis in reality.

A cursory search of the old newspapers and gazettes I have collected over the years only calls forth a few cursory incidents involving the penis. However, practically all these instances involve the forced removal of the misbegotten member, suggesting that there are a few unfortunate souls may have indeed been given the black gift of this dark meat. One can only assume that these isolated incidents are the result of freak mutations caused by the ever-increasing adoption of nuclear power and other technologies which forsake God's will. In a world which feared and loved God, and duly cast out all heretics, no man or woman would be cursed to carry this abominable weight with them.

Sex isn't bad in-and-of-itself -- as usual, it's how you use it. There is nothing sinful in copulation of animals, or in marital relations[1]. The problem is when sex becomes a value and a need for its own sake. The same can be said of most worldly things, though -- for example, eating food just because you like the taste of food is a deadly sin. It is called gluttony.

Again, I'll reiterate the most important point here: sex becomes a problem when your life starts to revolve around it. As long as you keep sex down to a bodily function, without endowing it with mystical powers, you are doing fine. However, most Americans are positively insane when it comes to sex -- for most, it is the most important thing in their life. That is the problem. Do you see what I am saying?

[1] According to Christian doctrine, raising a family in Christian spirit is a heroic deed comparable to those of the monastic lifestyle. Keeping your marital relations chaste is extemely hard.