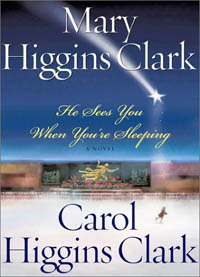 Our first book up for review is an interesting one. Right off the bat we see that not only do the authors' names dominate the cover, but there are two of them and they are apparently related (one would suspect sisters). The names are centered and rendered in a rather dull serifed font, and the bluntly static placement and styling is rather perfunctory. It is an odd contrast whereby the authors seem to acknowledge that who wrote the book is more important than what the book is about, yet at the same time they do not seem comfortable with this facet of their work, deciding to get the formalities over with as quickly and painlessly as possible.

After assessing the names we are drawn to a shooting star that trajectories in from the top left in a gentle arc, but the star does not hold our attention. Rather, it leads us to the yellow, nuptial-esque script title He Sees You When You're Sleeping, albeit to the right edge, forcing us to scan back to the left to read it properly. This title, a line from the popular Christmas carol, warmly informs us that holiday festivities will feature prominently in the story. Beneath the title, in smaller, blue type, are the requisite words "A Novel", required by federal law to ensure that it is not accidentally mistaken for a factual treatise on the deforestation of Madagascar.

About two thirds of the way down the cover, running in full bleed from left to right, is a thin image that had me confused at first. I couldn't quite make out what it was and thought it might be the dashboard of a car. Further, there was a small figure in red in the foreground, apparently running away from something. Upon closer examination I realized that it was Rockefeller Plaza! And as would befit any Christmas novel staged there, the red-clad figure was in fact an ice skater! As final punctuation for this classic scene, the shooting star (the Star of Bethlehem, no doubt) was sprinkling færy dust on the skater, symbolizing the magic of Yuletide recreation.

I had my doubts as to whether or not I had grasped the full meaning of this book. It was the title that first gave me pause. Why would someone choose such a potentially ominous line from Santa Clause is Coming to Town as the title for their novel? As I reexamined the cover its true import slowly dawned on me, like a February sunrise dragged up from slumber on a bitterly cold winter morning.

Rockefeller Center. New York City. An unabashedly exuberant, art deco skyscraper, built with oil money by one of the wealthiest capitalists of the 20th century. Why does the cover of this book only show the plaza out front? What happened to the 70 story monolith behind it? With a growing sense of dread my eye returned to the "shooting star" that I mistook for a biblical symbol. It does have religious significance, and its origin is certainly a middle Eastern country, but it has nothing to do with Christianity.

What a fool I had been, believing that the city of New York could so easily shrug off its recent tragedy. My initial interpretation of the figure in the foreground was correct. It is not a skater, it is someone running in terror from a collapsing building. And what I would like to see as færy dust is really shattered glass, falling on an innocent victim who is already covered it red red blood.

As the grimly prophetic Christmas ditty from which the title of the novel was taken played in the back of my mind, I finally arrived at the grimmest revelation of all: Osama bin Laden looks a lot like Santa Clause. 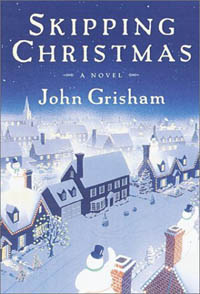 John Grisham has carved out a very successful career for himself writing gripping tales of legal shenanigans, so it is a bit of a surprise to see him offer up a Christmas story. Another twist is the author's name treatment on the cover. Someone of Grisham's popularity invariably gets the author-bigger-than-the-title treatment, but that is not the case here. Combined with the non-legal topic of the book, it becomes apparent that Grisham is downplaying his fame in an attempt to be taken more seriously as an author.

The type on this cover is also very soft, appearing almost as if it were coated with a gentle blanketing of newly fallen snow. We are definitely supposed to see this as a kinder, gentler John Grisham novel (and it is a novel, as the label again reminds us). I certainly have my doubts, though. Skipping Christmas? What sort of communist pagan would willfully skip such an important and joyous holiday? A former lawyer, perhaps?

Beneath the text is a classic small town scene, complete with church steeple in the background. The only thing missing is Jimmy Stewart running down the street, shouting "Merry Christmas, Mr. Grisham!" In fact, this cover could almost be the work of Thomas Kinkade were it not for the melancholy blue tone that dominates. The title was clue number one that something is amiss in this little town, and the washed out, somber hues are clue number two.

Clue number three is the house dead center of the book. All the rest of Holiday-ville is brightly lit up in anticipation of Saint Nick's arrival, but not this house. Someone is indeed skipping Christmas.

Of course now we want to know why this one family of heathens haven't decorated this year. What are they trying to hide? You and I may not quite know, but the I bet snowmen sure do. There they stand, two in the immediate foreground and two flanking the darkened home, arms upraised in greeting to each other, hats cockily tilted just so to demonstrate their deeply held wisdom. Sure, they know what's afoot, but... why the fuck are they on the roofs of the houses?

Well, never mind where the snowmen are. Let's look deeper into the scene.

Along the street in front of the houses are tire tracks in the snow (hard to see in this picture, but trust me, they're there). The tracks describe the path of an auto that approached the dark house from the right, turned into its driveway, then backed out again and returned from the direction it came. Very curious, these tracks. As we begin to ponder them we realize that the snowmen are still on the fucking roofs. What the hell are they doing up there?

Anyway, the house at the bottom left is not only well lit, the front door seems to be open and the snow on the front walk is covered with footprints (again, see the larger image). This is a classic small town family, enjoying the company of many seasonal visitors. But not only do these footprints fail to lead to the center house, they dare not even cross in front of it. What are those carolers afraid of? Is it the leering snowmen?

No matter what else we attempt to focus on, those damnable creatures lurking above just keep dragging us out of the scene. Who built them? How did they get on the roofs? Were they airlifted in? And... oh my God, they're right next to the chimneys! That is just cruel beyond belief, placing these delicate beings in such close proximity to heat!

You know, they're glowing, too! What in the fuck causes a snowman to glow? Have they been set atop lightbulbs? (This could be a fire hazard!) Were they crafted with jellyfish innards? Are they radioactive?

I am just flabbergasted by all this, and I simply can not make any sense of it. Whatever the overall theme of this book may have been, it was lost. Those demonic beasts on the peaks of the houses have completely ruined the novel for me.

But I'm shocked that you missed one point. The snowmen are glowing because they are not really made of snow. Careful examination of the rightmost snowman reveals a power cord originating in the hind-quarters of the 'snowman.' These are clearly plastic 'snowmen' designed to look like the real McCoy. This is troubling because the rest of the scene is classic, smalltown America. The tastefully decorated houses have white Christmas lights running along their most prominent lines, not multi-colored monstrocities with reindeer and santa displays in the front yard. These 'snowmen' are more of the latter than the former. Indeed, they would be quite loud and obtrusive, and likely annoying to the neighborhood association.

But lets see, why might they be there? Well, if I were to put the dark house under surveillance, these 'snowmen' are in the exact locations I would choose to place hidden cameras and parabolic microphones, infra-red nightvision scanners, etc... (if the cords can provide power to the lighbulbs, why couldn't they also power these things?) The 'snow'men's plastic bodies would do a good job of protecting this sensitive equipment from the elements. But why would, oh I don't know, the FBI or CIA want to observe the goings on of the darkened house? I can think of one reason. There is indeed something nefarious going on in this neighborhood, but the 'snowmen' are guardians of America, not plotters of its demise.

It appears as though John Grisham is indeed moving away from novels about lawyers, but perhaps not necessarily towards It's A Wonderful Life rather towards something more along the lines of Tom Clancy. It speaks volumes to Grisham's writing ability that he was able to so quickly write this novel addressing the most pressing concerns facing the civilized world.