The spiral galaxy M31, also known as the Great Andromeda Galaxy, is considered by many to be the most spectacular deep-space object (DSO) in the sky. Lying at a distance of approximately 2,900,000 light-years, this galaxy is visible to the naked eye and has a larger apparent size than the full Moon, which is only a quarter of a million miles away! M31 and its galactic companions M32 and M110 have long been a source of delight and fascination for amateur astronomers everywhere; its countless stars and spiral structure and intricate system of globular clusters is revered the world over.

Yes, there can be no doubt that M31 is very beautiful. But then again, so was Helen of Troy. Her beauty was unparalleled, but she ended up causing the Trojan War, a bloody conflict in which countless thousands of Greeks and Trojans were killed. History is full of examples of beauty being a front for deviousness, treachery, violence, and mayhem. Look at Cleopatra, Joan of Arc, and Margaret Thatcher. And this principle is not limited to living things; the bickering over the lush and disputed province of Kashmir (which has been described as a "paradise on Earth") has the possibility of spiraling into a nuclear war between Pakistan and India.

And so it goes with M31. Despite its splendor, the galaxy represents a clear and present danger to us. The fact of the matter is that it is quickly advancing towards the United States of America at an incredible rate of speed (approximately 300 kilometers per second) and in time, it will collide with us. It doesn't take a degree in astrology to realize that if this were to happen, it would visit untold destruction and mayhem upon all Americans.

There is no obvious reason for this aggressive behavior. Certainly, the U.S. has never threatened or otherwise maligned M31, yet here it comes anyway. M31 has never proven itself to be particularly useful; in particular, it has served no purpose in the recent (and ongoing) war on terrorism. With the lack of any evidence to the contrary, I think the conclusion is elementary: M31 needs to be considered an enemy galaxy. There is no other explanation for its belligerence.

For that reason, I submit that the United States needs to agressively pursue a theaterwide missile defense system that is capable of defending this great nation from this blue-shifted Beelzebub. Now, you might point at the galaxy, with its immense size and nearly-impenetrable defenses and ask: "Pardon me, sir, but what good are a few missiles going to be against that?" Take heart; I have been assured by some of America's top scientists that M31 has an intrinsic and fatal weakness. In particular, a few well-placed missiles aimed directly at the galactic nucleus will get the job done nicely. A precise hit will start a chain reaction, which should destroy the galaxy. Only a precise hit will start a chain reaction. 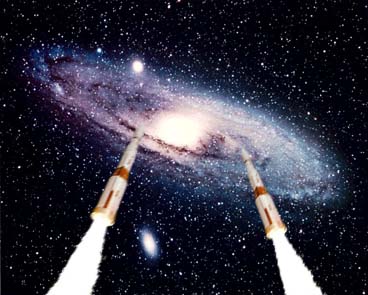 Now, recent tests of our existing missile defense capability have been somewhat promising. There have been prominent failures, but in between there have also been great successes. Make no mistake about it: our capability to defend our nation from threats such as M31 is improving. Our current technology might lack the accuracy to directly strike the nucleus of our galactic aggressor, but as long as we work together as a nation, I am convinced that the day will come when our missiles will have the kind of unparalleled speed and accuracy necessary to take out the Great Andromeda Galaxy.

President Bush has taken an important first step by pulling out of the useless and outdated ABM treaty. This action enraged the Communist Russian Federation, and it will doubtless enrage M31 when they receive the news 2.9 million years from now. But this is not a time for the U.S. to be concerned about "buddying up" to everybody in the Universe, and it would be a tragedy if we let public opinion from enemy nations dictate our domestic defense policy. The childish rantings of a few vodka-swilling leftivists is not going to deter the U.S. from taking appropriate actions to defend itself.

Of course, the attacks on this policy are not going to come strictly from outside of America's borders. Liberals are likely to decry any plan to defend ourselves from M31; they will call it an "ignorant" or "bellicose" course of action. Instead, they will claim that we need to take time and learn to "understand" M31 and "bond" with it. And they will be wrong. This type of warm-and-fuzzy circle-jerk politics might fly at UC Berkeley, but in the real world, history proves that it just doesn't work. We would do well to ignore the liberals, just as the moral community has done for centuries now.

This much is clear: America must blow up M31. We have the tools, and we have the talent. Our skills will certainly need to be refined, but the time to start is now. M31 won't hit us in our lifetime, or even in our great-grandchildren's lifetime, but make no mistake about it .. it will hit us. The sooner we realize and accept this fact, the sooner we can begin to prepare our counteroffensive.