And God spake all these words, saying, I am the LORD thy God, which have brought thee out of the land of Egypt, out of the house of bondage. 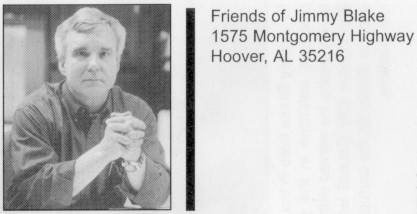 Thou shalt not bow down thyself to them, nor serve them: for I the LORD thy God am a jealous God, visiting the iniquity of the fathers upon the children unto the third and fourth generation of them that hate me; And shewing mercy unto thousands of them that love me, and keep my commandments.

Jimmy Blake M.D. is a former Libertarian and a former member of the Birmingham, Alabama City Council. He is now a Republican and desperately wants to be a candidate for the Jefferson County Commission. I will spare you the boring details, but this man thinks he should be in the Republican primary. He isn't. Like many desperate men before him, he has turned to religion. His moving portrait appears on a mass-mailed petition for his inclusion on the ballot as an independent candidate. He has directed his prayerful request for intercession to his false deities, the voters of Jefferson County, Alabama, USA.

In the Ten Commandments, Our Lord makes it quite clear how important it is to worship Him and only Him. He states this right from the start. This commandment is central to the entire body of Judeo-Islamo-Christian practice. If you are not worshiping the one true God, then obviously you are on the wrong track altogether. Elected officials are generally considered men and women of Faith; most politicians (at least Republican ones) are quite vocal about their devotion to the Lord Almighty. So why do these normally upstanding Christians go astray and delve into the dark world of Voterism? What is this disturbing new cult?

Voterism is growing at an alarming rate. The practice is most popular among politicians or persons working in the political field, but some of its adherents include pollsters and journalists. Voterism incorporates many paganistic qualities, such as the worship of demiurges. Such demiurges include the Soccer Mom, the Angry White Male, and the Racial Minority. Voterists expend great effort in divining the will of these demiurges, and finding ways to appease them.

In retrospect, it is easy to see why so many politicians fell into the trap of Voterism. The electorate is all-powerful over the politician's life. The voters decide if the politician is favored or unfavored, if he has power or shame. Verily, the voters decide if the politician will even be able to feed his family! The whims of the constituency are fickle. Woe be to any politician if the desires of the populace are not appeased! Yet these desires remain mysterious and unfathomable. Pollsters, such as necromancers, use dark practices like numerology to divine the will of the people. But the messages obtained are often clouded and conflicting. The divinations of the pollsters swing wildly from week to week, and the politicians are left thrashing about in a sea of confusion. It is no wonder that Voterist politicians confuse the electorate with a powerful god.

So what is to be done? I propose that politicians need even more influence from powerful multinational corporations. Many scarred leftivist veterans of the "Battle in Seattle" have decried the large influence corporations hold over lawmakers. While this solution of increased corporate influence may be unpalatable, it is quite necessary. We are dealing with nothing less than immortal human souls, on the path to damnation! It is widely known that well-financed candidates can purchase their positions with well-placed advertisements and well-executed assassinations. This money will give the politician power to control the electorate, rather than the other way around.

Skeptics may say that the politicians will mistake the corporations for gods. I doubt this will happen. The corporations are immediate, earthly and comprehensible. They distribute power in the non-magic form of money. Corporations' wants are constant and are appeased by simple things like higher taxes and lower tariffs. Corporations do not demand mystical things like integrity or human rights. Yes, it is possible that more corporate money may have deleterious effects on the US political system. But we must not forget the poor souls of Voterist politicians! The very salvation of these men and women is at stake. I call on all owners of multinational corporations to increase your political donations today!