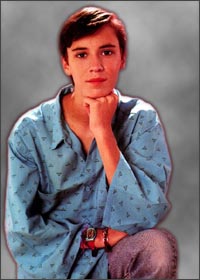 Perdida: So, your real name is Richard William Wheaton.. I can understand calling yourself by the middle name in order to avoid the inevitable 'Dick,' but why do you gratuitously lop off an "L" to make "Wil?"

Wil Wheaton: It's all part of my personal Project Mayhem. And I wanted to ensure that I could NEVER get a souvenir license plate with my name correctly spelled on it. It, uh, builds character. Or something.

P: Although you've had strong roles in Stand By Me, Flubber and other films, most people remember you best as Wesley Crusher of ST:TNG. In Wesley's first appearance on the show, he barges onto Captain Picard's bridge and promptly pisses off the bridge crew with flaming displays of "know-it-all".

In the eloquently stated views of many fans, Wes never changed. If you had been Captain Picard, would you have kept Wesley on board?

WW: Contrary to popular belief, Picard kept Wes on board not for his clearly superior intellect, but rather for his smooth, hairless chest.

For some reason that scene was cut.

P: What do you imagine happens to Wesley after he defects to a radical Indian planet and goes off with The Traveler?

WW: Well, at first, Wesley zips around the universe, unencumbered by the limitations of Space and Time. He travels through the Continuum, back in time to the formation of Life, The Universe, and Everything. He drinks deeply from the fountain of knowledge, and finds his thirst nearly unquenchable. Then, he discovers his true calling: Traveling throughout all of space and time, banging hot teen bitches for all eternity.

P: The average Trek fan, at least on Slashdot, had something like this to say about the premiere of "Enterprise:"

"Because 100 years after the invention of the warp drive, mankind still hasn't figured out not to exploit women. Genetically engineered insect-eating ?female? strippers (one pink and one blue, symbolizing the hetero and homosexual preferences they were engineered to serve) dancing erotically while the crew of the Enterprise dropped its collective jaw, forgetting duty to God, Country, and Humanity.

Forgivable, perhaps, until the scene we all knew was over the line. Cleansing alien spores using BLUE light (rather than UV) and hand-applied disenfectant? Ok. BUT WHY THE GRATUITOUS NUDITY AND SEXUAL UNDERTONES? The only thing that surprised me was the lack of a scrolling 1-976-HOT-SLUTTY-VULCANS number on the bottom of the screen. As the camera lingered on as much of the exploited actresses' flesh as it could legally swallow, I realized that this Star Trek was determined to boldly stoop lower than any drek before.

If you want to do something useful with your time while this Star Drek is on, spend the hour collecting donations for your local battered womens' shelter. With shows like this on TV, they're going to need the support."

What's your take on the first episode? I personally think that Enterprise is trying to re-capture an "old Trek" sensibility, where Kirk always bonks the sexy girl alien, but ends up falling flat on its ass.

WW: I completely agree. The suggestive photography was simply unacceptable. I will not rest until T'Pol gives us FULL FRONTAL NUDITY!

P: The latest strategy in Brent Spiner's desperate campaign to worm out of the role of Data, beginning in Star Trek 9, is his claim that Data can't play an "ageless android" any more. In response, there are rumors that #10 (Star Trek: Nemesis) will kill off the Data character or replace him with a CGI.

On the other hand, a growing movement has sprung up to save the beloved Data character. They're serious: they have drafted petitions and sent them to Spiner's agent, and are cold-calling Rick Berman's office at Paramount. One fan won't take her Data-loving kids to the film if the character's killed off.

As a person who has semi-successfully escaped from the Trek franchise, how do you think Spiner should solve this problem?

WW: I wonder if those people who send petitions to Paramount spend a fifth of that energy writing politicians or getting involved in their communities? I mean, write those letters and petitions...but do it for something that MATTERS.

I'd tell Brent to tell Berman that he wants to have a career beyond Star Trek, and he'd like to discuss becoming a recurring, rather than a regular. Worked for me.

P: Let's say some group of terrorists blew up a Federation planet, and Picard had to decide how to respond- how to protect civilians from getting blown up without starting a huge galactic war. What do you think he'd do? Do you think that Star Trek's mushy liberal view point, like the Prime Directive of non-interference, holds any water in today's post-tragedy world?

WW: Well, the first thing he'd do is hide out for the better part of the day, when the planet was blown up, because his handlers knew he wouldn't be able to address the UFP with any grace or aplomb. Then, when he did speak, he'd tell the UFP that everyone is either with us, or with the terrorists, to effectively quash any criticism of his policy decisions. Then he'd find a planet where he could claim the terrorists lived, and he'd launch a long and profitable war against that planet, with no endgame in sight. His approval ratings would skyrocket, because nobody would want to be perceived as "against" the UFP. As an added bonus, when he wanted to do something really stupid, like drilling on Lothar 7 for oil, in the Lotharian Brazilfish Reserve, it'd be very easy for him, because everybody would be so focused on the war that they wouldn't notice.

Wait, none of that makes sense. That's just plain stupid. Nobody with any brains would do anything like that.

Picard is smart, and what he'd do is improve security within the UFP, for REAL, even if it cut into profit margins for the big companies that drive the UFP's economy. He'd also do it in an informed, well-thought out way, ensuring that all UFP citizens were safe, without having to trample all over their rights as UFP citizens.

But something like that would never happen. That's just TV.

Editor bc asks: "Did you ever feel attracted to Gates McFadden? Or lobby the scriptwriters (who were fond of Greek mythology) to include a plot involving the Oedipal complex for your character? Do you still have your copy of the Tasha Yar issue of Playboy? Don't you think the dreams of young men wishing they could be you and be with your mother were due to this corrupting Star Trek influence? Don't you feel guilty? I would."

WW: Boy, you know, I was never attracted to Gates. I think part of it was that she was my onscreen mom. I'm not sure. Maybe it's just me.

My fellow editor seventypercent asks: "I have to admit that Star Trek, in all of its various incarnations, has always made me spitting, hopping mad. Never before in the history of television has there been a bigger advertisement for Communism than Star Trek, and the people responsible for it have been allowed to get away with it for decades. In First Contact, Captain Picard (a foreigner) freely admits that "money doesn't exist in the 24th Century!" Instead, what has been created is a Marxist paradise where the philosophy is "from each according to his ability, to each according to his need." The collectivism, militarism, and atheism of Star Trek is diametrically opposed to the principles that have made the United States the world's foremost (and only) superpower.

"Now, I don't hold you personally responsible for this; after all, when you first came on the show you were young, impressionable, and easily duped by the bloodthirsty Communist butchers behind the show. However, I do have a couple of questions. First, were you ever aware of the presence of Soviet or Cuban government officials that were on the set or involved in the production of Star Trek: TNG ? Second, now that you are older and wiser, do you understand the irreparable harm that you and your fellow cast members have done to this once-great nation, and do you feel any residual remorse?"

On a related note, editor dmg asks: What is with the racist, sexist, and anti-religious symbolism clearly present in star trek ?

The Borg's cube-like space craft is obviously a symbolic reference to the cube-shaped kaa'ba in Mecca, Saudi Arabia. Are the star trek writers suggesting that muslims are a hive-like collective of murderers ? This is hardly respecting diversity.

And the racism ? Spock is constantly riduculed on the sly for his 'logical' approach. OF COURSE HE'S LOGICAL, HE'S A FUCKIN VULCAN. Drawing attention to it is simply racist.

The two thrusting phalluses on stilts that form part of the original Enterprise need no further interpretation. the phallic motif persists throughout the show.

It also encourages drug taking. Everyone knows that 'beam me up' is drugs slang for get me some drugs right now. Is this really the kind of show we want our children to watch?

WW: Your questions are all valid. A car of men in grey suits will be arriving shortly, and they'll answer all of them for you. Resistance is futile.

P: Thanks for your time, Wil.

WW: Hey, thanks for showing me your tits.

A writer and journalist as profilic as perdida makes herself out to be would not allow her interviewee to manoeuvre around questions as important and relevant as 70%'s and dmg's. While I understand that Wheaton's boyish charm could have caused her to momentarily lose her journalistic edge, still I expected more. But alas, we are all only human after all.
---
A seasoned witch could call you from the depths of your disgrace, and rearrange your liver to the solid mental grace